When it comes to filming some good action shots, then there is just no doubt that action cameras are the best choice. Today we have many such action cameras in the market with GoPro being one of the very best and also one of the costliest. Still, no matter how good or efficient an action camera such as GoPro be, because of their small size, there is always room for some extra addition and upgradation such as a ‘Gimbal’ which works as a stabilizer as well as an anti-vibration instrument to give us a more smooth and better filming experience.  But finding the Best Gimbal For Gopro from huge options available in the online & offline market is the difficult thing. So here we are with this post where we will help you to find Best Gopro Stabilizer in your budget which suits all of your requirements.

How Does A Gimbal Work?

Conventionally, a ‘Gimbal’ is said to be a pivoted support which enables an object to rotate itself in a single axis. However, when it comes to an action camera Gimbal, they mostly come with 2 or 3 axes allowing the camera to be rotated in all the three axis which is up & down, left & right & forward & backward. Hence allowing us to move the camera in any direction as we desire.

Apart from that being the main working principle of a Gimbal, there are other features and functions too which come along with a Gimbal which again may change from one type to the other, all of which will get clearer as we go down discussing our “Top 6 GoPro Gimbals”. 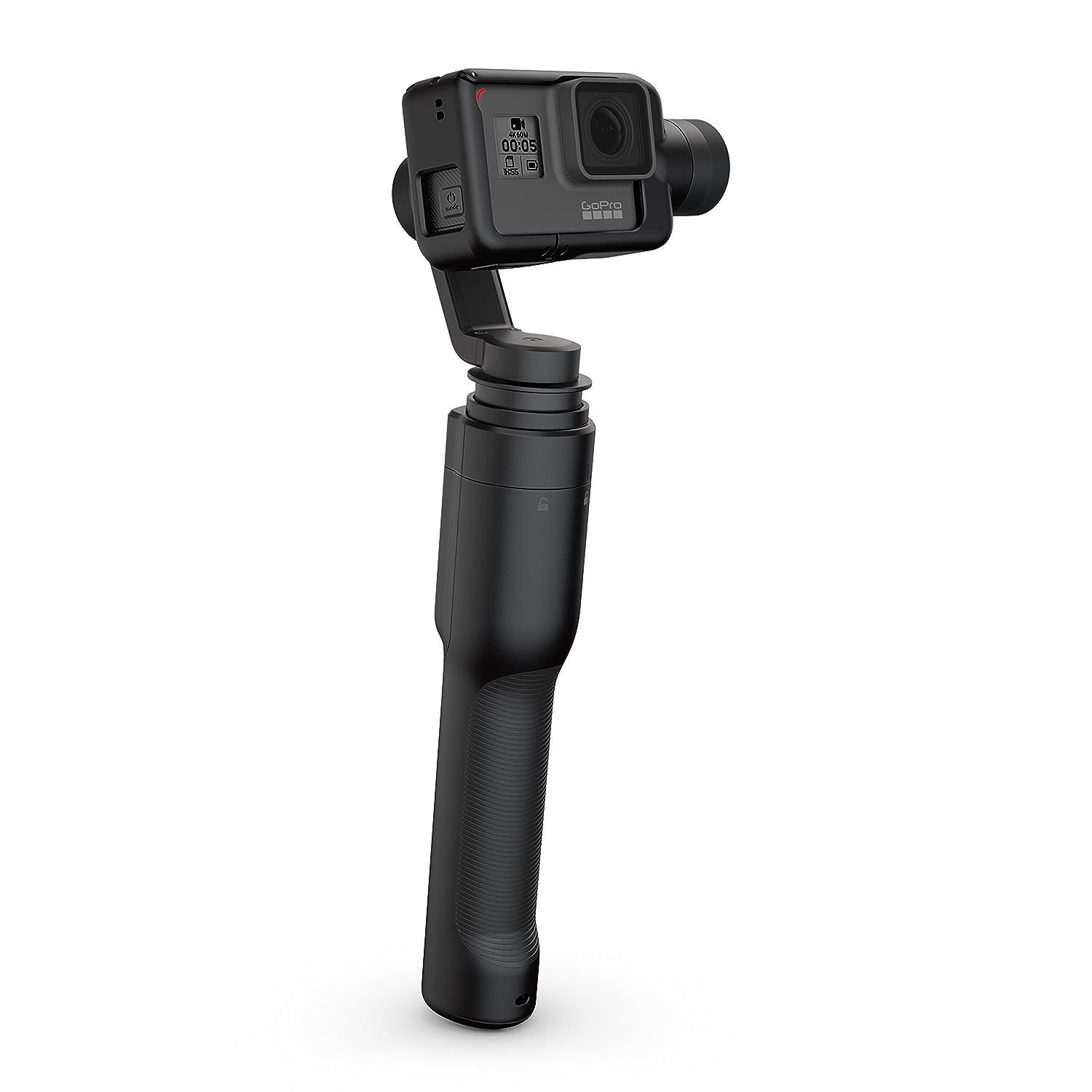 This device without doubt holds the brand name pretty well as the build quality and design you see on this instrument is truly spectacular. It weighs not more than 361 g which I believe works out pretty well when having to hold the camera for long spans of time.

Apart from that, the GoPro Gimbal comes with a Voice control feature to operate on just the command of your voice. Something, I would say can really be helpful on recording events like cycling, skating and so on where at times it can get really difficult to operate a device manually.

Lastly, if we have to talk about the cons which you may find in this device may be less battery backup and small size. One good charge should give you around 2 to 3 hours and not more than that.

So, in that part I personally feel the Karma Grip should have done some more work. And the small size is something I guess you will have to compromise giving its build quality and functionalities. 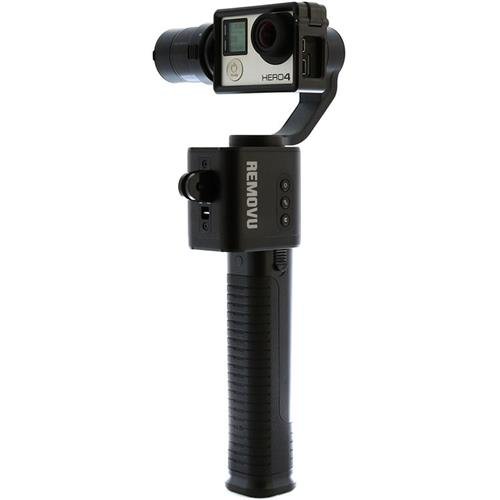 Although, quite a new contender in the market of Gimbals. Still, the Removu S1 waterproof Gimbal has made quite an entry for itself. Being the first to come up with a waterproof Gimbal, the Removu S1. They have really managed to attract the eyes of many. Looks and design wise I would say it has quite a simple and subtle approach to it.

You should have no problem with the grip as well as the function buttons. As for battery life, it easily gives a good backup of 4 hrs or more. But if you want to go one further step ahead, than you can easily use a REMOVU spare battery to increase battery life up to 8 hrs. Also, the batteries unlike the GoPro Karma Grip is removable so you can carry multiple batteries at the same time on you depending up your needs.

Overall, I would say the new comer has got a lot of potential and would sure not disappoint you if you would like to go for at any point of time. And if we need to talk about the cons, then there are still some more reviews to do on the Removu S1 before we come to any conclusion. Oh! And I almost forgot, you also get a detachable wireless joystick to help control the device more efficiently.

NOTE: When Removu says that their Gimbal is waterproof, it does not actually mean that the device can be fully submerged into the water. What it means that it is rain proof or splash proof and can withstand some heavy rainfall or splashing without any issues. 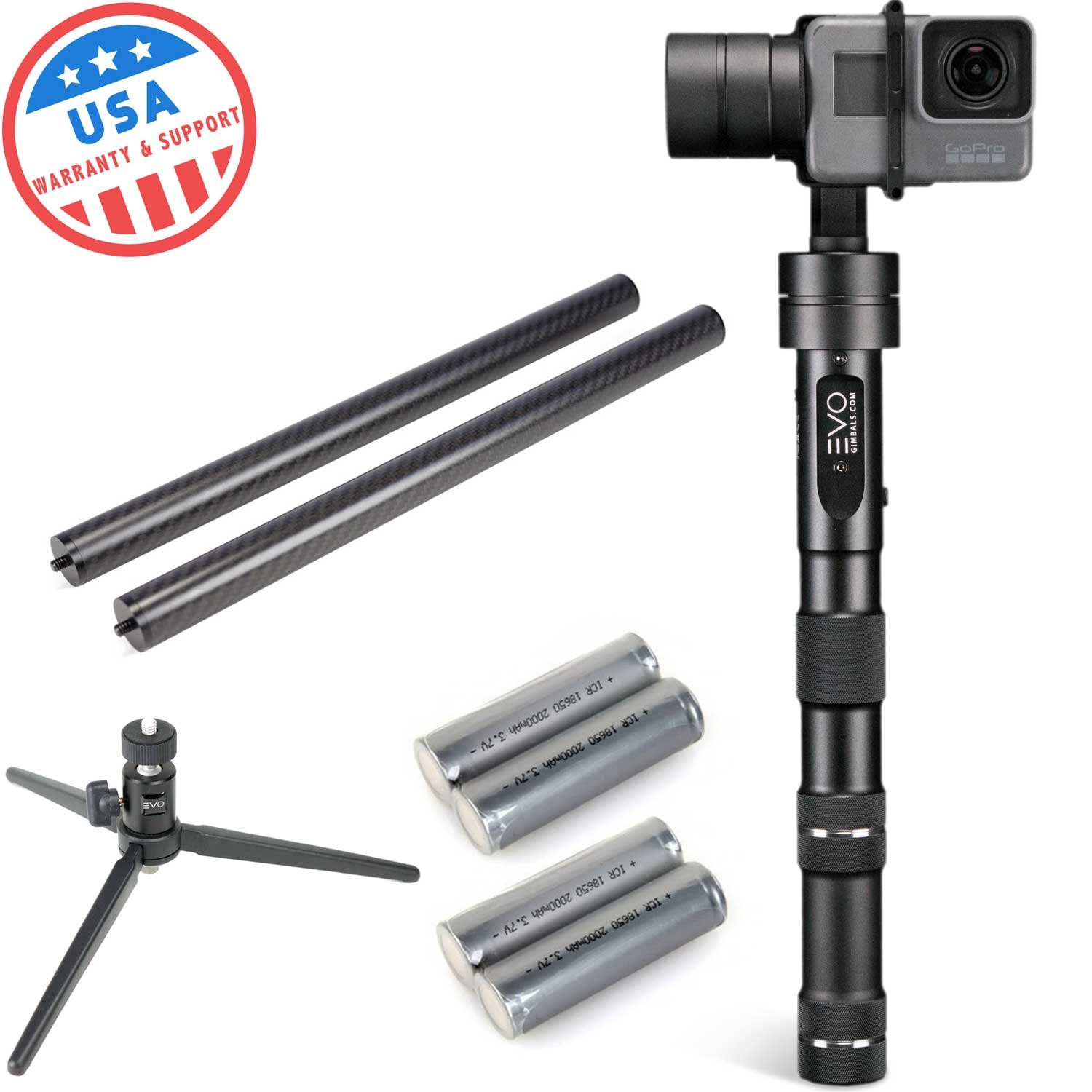 Coming with a battery backup which would last you easily up to 5 hours, the EVO GP 3 Gimbal is one Gimbal which comes with a fully configured software and needs no extra software configuration of any kind. All you need to do is just take it out of the box and start filming.

The EVO GP 3 too is splashproof and rainproof like the Removu S1. This means that you can take it out anytime whether it is raining or not. The build quality of the device, I would say is pretty firm and strong with a reflection of complete finish. Something, I would say works just perfect with the price it comes for.

Again, when it comes to the cons, I guess there is no major issue with the EVO GP Gimbal and should work like a charm for anyone who owns this lovely gadget for his or her GoPro camera. 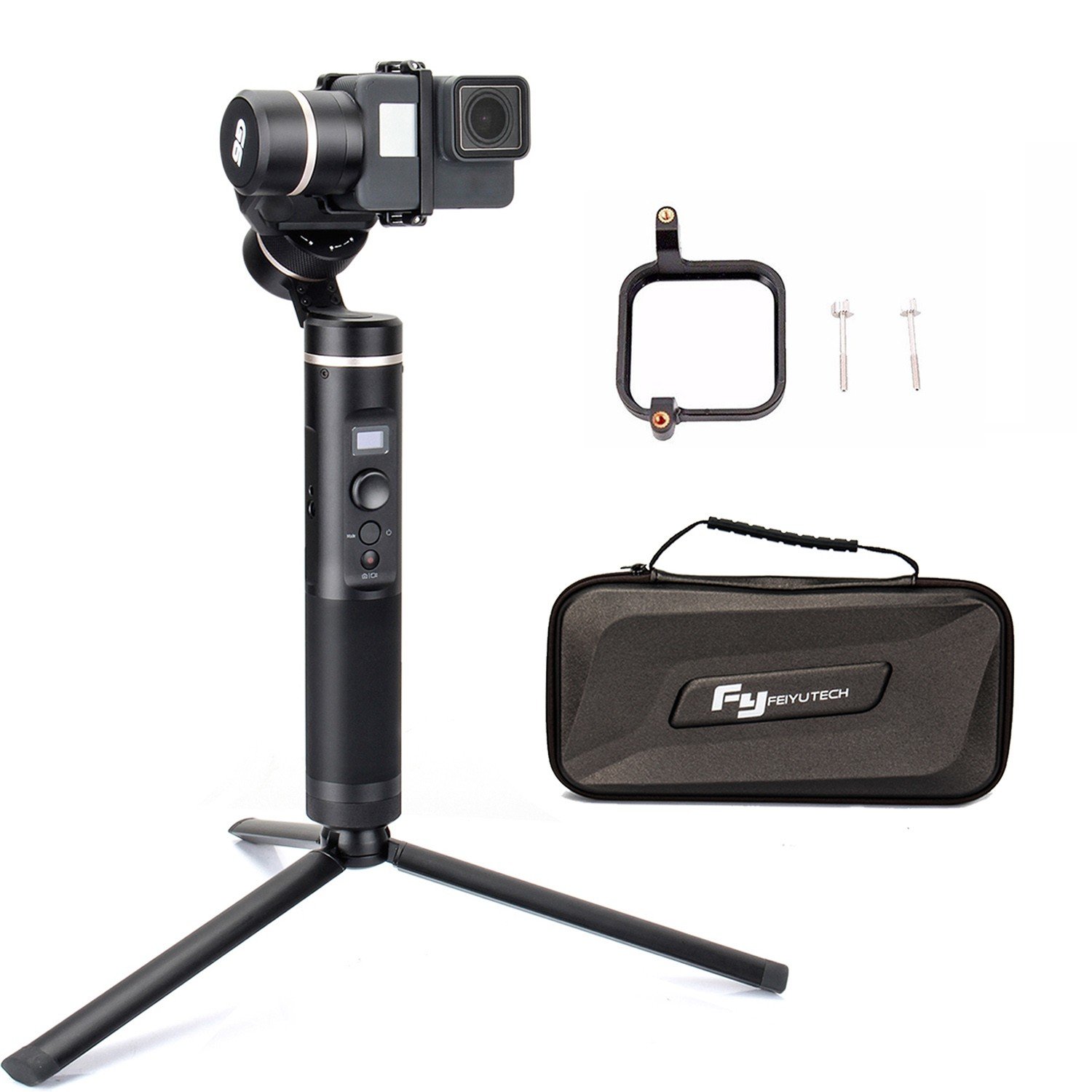 The Feiyu Tech G6, I should say outshines all the rest of our contenders today when it comes to Battery Life as well as performance. That being said, normally one good charge should last easily for not less than 12 hours. The batteries are removable which in itself works wonders at times when you need to go on long treks and need to carry on multiple batteries on a single trek where there is no provision of charging up the Gimbal.

Apart from all that, the Feiyu Tech G6 comes with a number of stabilization modes such as Pan Following Mode, Selfie Mode and Panoramic Mode just to name a few. These modes not only help you take epic shots but also make filming very easy and efficient.

And lastly, if we need to speak of the cons which may be associated with this action camera gimbal, then there is one which we cannot rule out which is the noise that the motors in the Gimbal produces. Although this noise may not sound so loud to most ears can many a times be responsible for degrading the sound quality of your beloved recording. 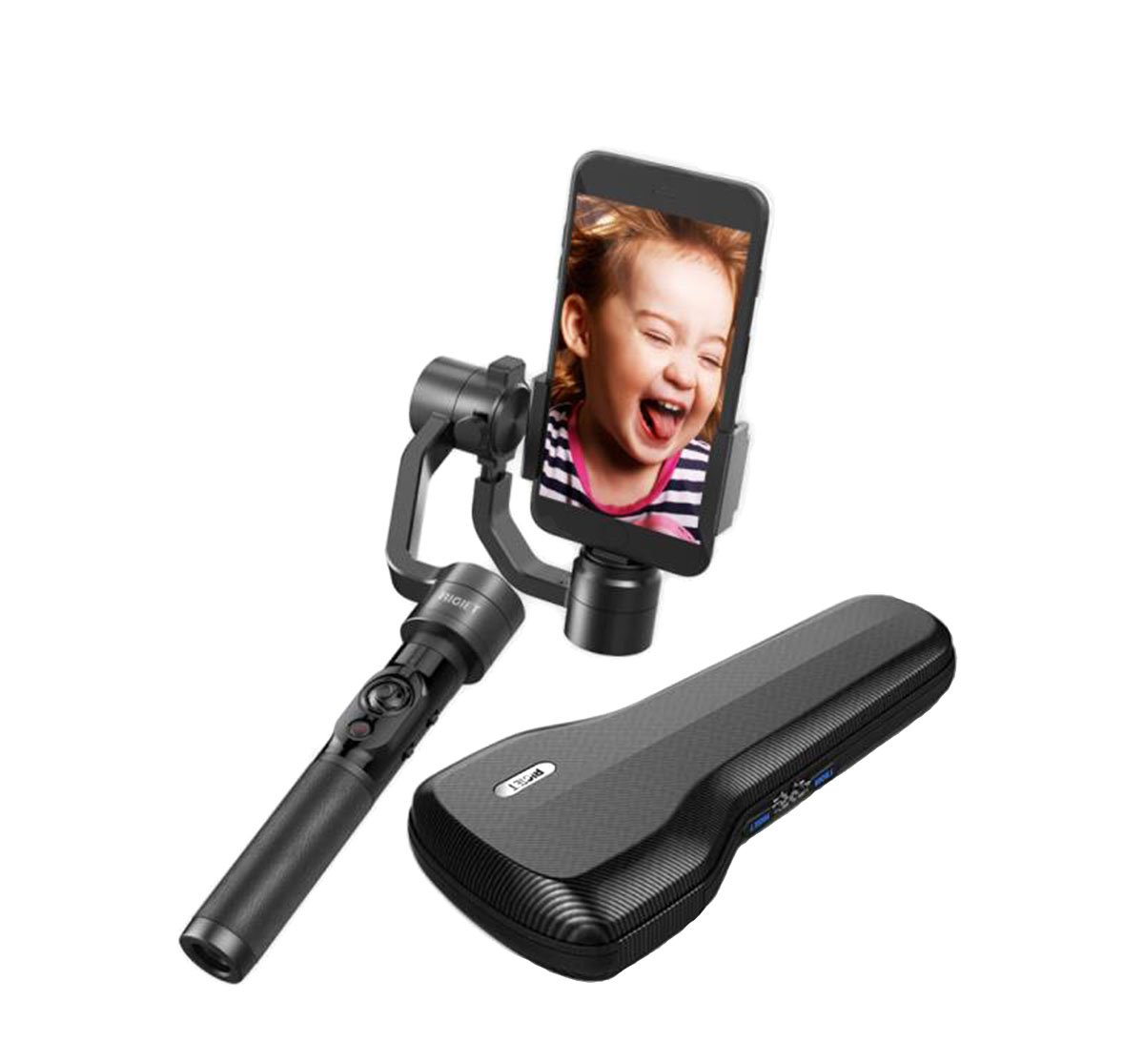 An action camera Gimbal just built for capturing “Action”. This Gimbal comes equipped with a number of modes out of which “Auto-tracking” is one.

This mode lets you film even the most action filled moments without having to compromise on the stability and focus of your GoPro or even smartphones if you are using any, as the DOBOT Regiet enables you to mount nearly every kind of smartphones as well as your very own GoPro action camera.

Also, when it comes to compatibility between smartphones and the DOBOT Gimbal then most popular OS like the iOS and Android work like a charm with it.

Doubbt is a Technology website Focused more on Gadget Reviews and Technology hacks that make life easier. Our goal is to educate people with the right knowledge.

Follow us on social media to get all the updates.

The Easiest Way to Burn Fat!